A$AP Danny: From LDB Student to the A$AP MOB 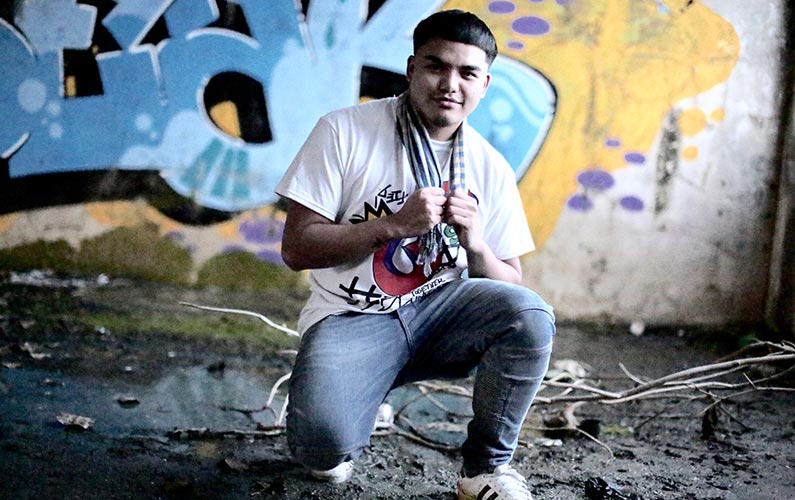 When Audio Engineering & Music Production School is Worth It

Imagine at 20-years-old you can say that your wildest dream is already real.

“I’m just blessed,” says Lil’ Drummaboy Recordings Student, and artist, Danny Wunderkind as he reflects on his accomplishments in music.

The quiet young man sits beside me on the couch for a casual afternoon talk. His gold chains draped over a Dolce and Gabbana t-shirt when he tells me he’s going to NOTO that night. Swagger seeps through his ripped jeans but he worries he doesn’t know what to talk about.

Here’s what we got.

“Instagram name A$ap underscore Danny,” — as he was sure to mention in his introduction– is already buzzing on social media for his creative talents. Though he only decided to pursue music less than a year ago, Danny is already working with A$AP MOB members including his favorite, A$AP Rocky, for whom he’s mixing a new track.

“Ard so this what happened,” he says smiling, “I wanted to do music but I never learned how to do music, like engineering and all that.”

While he was not able to begin his education just yet, Danny decided to capitalize on his artistic talent in order to connect with artists in the industry. A brilliant networking strategy, Danny began by drawing album covers for artists he liked and sending them out online.

While developing a network of creatives across the country, Danny was able to connect with A$AP Twelvy — a member of his favorite hip-hop collective A$AP MOB.

Meanwhile, at Lil’ Drummaboy Recordings (LDB) we were worried about him.

Having no background in Audio Engineering or Music Production, Danny struggled during the first months of classes without his own personal computer. With one-hour, weekly training sessions, LDB students are expected to spend time at home completing assignments and practicing what’s been covered in their lessons.

Without a recording set up at home, Danny could only depend on his weekly sessions to get the hands-on practice that he needed to progress at the rate that he wanted to progress.

After 5 months in his 9-month Audio Engineering and Music Production Dual Course, Danny bought a Macbook and loaded it with Pro Tools.

“Once I got a laptop I was just getting busy,” he says smiling at the floor.

In music, many people find themselves experiencing an obsession with their craft, working tirelessly at it because it’s the only place that feels natural. Danny got to fully realize his experience when he invested in himself.

Danny began working overtime to catch up and complete his Program at LDB.

“I was like, ‘I love mixing,’” he says describing his initial plunge into audio.

When working with only a pair of “regular Bose jawns,” as Danny refers to his headphones, it would be difficult for even Dr. Dre to execute a proper mix.

Being the resourceful cat he is, Danny works on his mixes at home and tests them at local studios in his Northeast Philly neighborhood; an approach that’s landed him a number of clients in Philly, NYC, and LA.

Three months after the purchase of Macbook, it was nearly summer and Danny was in his 8th month of our 9-month Audio Engineering School & Music Production Program. He would still have one more month of the dual course before graduating, and he was already working with A$AP Twelvy.

Building on the rapport stemmed from Danny’s art two years prior, Twelvy unexpectedly invited his young fan to NY for the weekend.

The NY rapper was curious to see what new perspective this Philly kid could provide, sending him home with three tracks to mix and master; the first assignment.

“He messed with [my work],” Danny says modestly before going on to describe the steady increase in jobs he received from A$AP Mob.

The first three masters quickly turned into eight, and before Danny knew it he was working with even more A$AP Mobbers including K$upreme, Producer AR, A$AP Ant and most recently A$AP Rocky.

“I don’t know how, but it just happened,” Danny smiles describing his success.

But with less than a year of audio education under his belt, Danny is nowhere near having the knowledge of engineers with decades of experience behind them. He is constantly met with new challenges and learning through the work he’s been getting, his most notable lesson being how to record. His professor: A$AP Ant.

“Yeah, that was scary,” he smiles, as Bohemian Rhadsody roars in the background; another student working on his final audio engineering project at Lil’ Drummaboy Recordings.

It Starts With Education

In the world of audio, every engineer and every studio has their own sound — their own method of operating.

That’s why at Lil’ Drummaboy Recordings, we often hire our own graduates — people who already know our sound and understand how to achieve it.

Similarly, artists focused on creating their own (sound)wave, will frequently seek personal audio engineers as partners in this process. This is the case with Danny and A$AP Ant who views their work together as a learning experience for the two.

“He wants to have his own sound, so hopefully we can find that.” And it’s only the beginning.

Have you run out of goals to accomplish at this point?

“No,” he laughs, “I still got a lot of goals,” and they aren’t strictly related to music. Outside of his evolving career in audio engineering and music production, Danny is also in the beginning stages of expanding his original clothing line ‘be.unified’.

Announced in 2016, Danny spent two years sampling clothes before launching in February of this year. Due to this high level of persistence and dedication to the quality of his work, Danny’s first t-shirt drop sold out in ten minutes flat — an idea that first hit him at 3AM. The inspiration dragging him out of bed, refusing to let him sleep before it was all on that page.

“Whatever pops in my head, I draw it,” he explains. And like most creatives and entrepreneurs, not every 3AM idea will make it beyond the sketchbook, nor is it always loud enough to wake you, but it’s clear when they are worth it. You just can’t let top-sellers die in the night.

Moving forward, Danny plans to explore shoe design next year after focusing 2018 only on t-shirts. He plans to incorporate a radio show, podcast and rap cyphers for local artists all under his brand ‘be.unified’, aiming to make it more than “just clothes,” he says.

Could ‘be.unified’ be your music brand too, or is that separate?

“It could be, yeah. Pretty much,” he says. And why wouldn’t they? As all of these creative pursuits are driven by one mind, it only makes sense they would overlap.

Just four days ago on IGTV, Danny released his first video ad for ‘be.unified’, which features himself modeling his first t-shirt.

The eccentric design speaks to fans of streetwear, quietly exploding with color against the white fabric while his music plays.

Danny’s original beat features a beautifully chopped R&B sample groaning in the distance. While the quirky synths and hard-hitting kicks create the character and momentum of this cloud-rap vibe, the sample evokes a reflective mood in the listener that almost feels spiritual; it inspires an emotion of wonder, of pride, watching the young star shine in his own light.

Running at just over a minute, this ad is a short, yet fascinating, venture inside of Danny’s mind; to witness it is to experience just a glimpse of his vision as one.

And all those weird sounds in his head.

“I just love music,” he says, “but I have sounds in my head that are like, unorthodox.” By allowing himself to explore ideas that are different, Danny has created a sound that is uniquely his — a goal that tells me he’s still working towards.

So what can we expect to see from Danny Wunderkind in the future?

“Damn,” he chuckles, taking in the question as LDB’s Environmental Specialist, Melvin, interrupts to ask if he can beautify the room. “Hopefully credentials with my name on many artists’ albums… That’s all I’m gonna say,” he laughs.