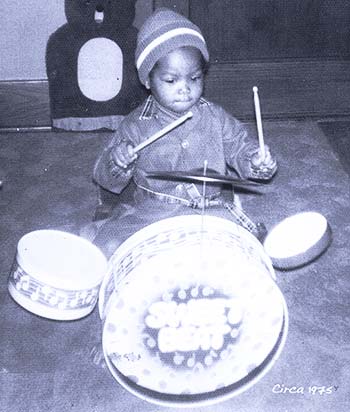 IN THE SUMMER of 1996 in Omaha, Nebraska, one year out of college and into a “career” in finance, Samori Coles knew that the path that his Family and friends expected of him was not the path that he would travel.

Every day at he would get off work at his day job, run home to change clothes, and head over to one of his buddy’s homes to partake in a recent new discovery.

What was that discovery, you ask?

Well, they “discovered” that it was ACTUALLY possible to create and record music in a bedroom, living room, basement, bathroom, or wherever else one chooses to do so.

Now, this was the so the recording gear that Mr. Coles and his buddy were using consisted of two cassette decks (one for playback and one for recording), a small mixing board, Casio keyboard, drum machine microphone. By today’s this set up would be considered rudimentary, at best.

Obviously, Samori and his friend did not literally “discover” home recording. But, to this was one of the greatest realizations that either of them had ever stumbled upon. And, to Mr. Coles, he discovered LIFE.

The ability to create and freely express one’s self through music and art is at the heart of what it means to be HUMAN. IT is also the ESSENCE of transformation and healing.

Within a year’s time of realizing that music was his passion and WOULD be his future, Samori Coles left his job as a Financial Analyst and boarded a Greyhound bus en route to the East Coast, ultimately settling in Philadelphia, Pa.

The name, Lil’ Drummaboy Recordings, came about shortly after arriving in Philly when Samori’s mom mailed him an envelope stuffed with pictures from his youth. One of those pictures was of Mr. Coles at 3 years old on his first drum set. Within seconds of laying eyes on the photo, “Lil’ Drummaboy” was proclaimed.

For the past 20 years, Lil’ Drummaboy Recordings has been a pioneer, leader expert in Digital Audio recording and Music production. What began on 2 cassette decks and a keyboard has transformed into a company that has recorded, produced, trained and guided thousands of artists, producers, musicians, audio engineers, and music entrepreneurs throughout the globe.

Our Philadelphia-based Recording Studio and Music Production School has been developed and cultivated with the aim of producing and guiding our vast community of creatives toward growth, excellence self-sufficiency.

The story of the creative that doesn’t pursue his or her dreams is a common one. That doesn’t have to be your story.

When you’re ready, let’s start or continue YOUR JOURNEY.

This error message is only visible to WordPress admins